The other day I got picked up in a van that was carrying 10 people from a country called Vanuatu, which I’ve actually never heard of before. I felt like I was back in Asia when they started playing this party music very loud and singing along.

They said that in Vanuatu, they can’t leave someone on the street, so when they see someone hitchhiking they HAVE to pick him up, because of their upbringing they can’t choose not picking him up.

When they see someone without a place to sleep they have to take him in. That reminded me of some other experiences I had in other countries, like getting denied service at some hotels in China for being a foreigner. Being harassed by Japanese and Australian police, being robbed at gunpoint in Argentina and many more. Man! While in Japan, I met so many people that would just only not help you out, but they would actually go way out of their way to make your my life more troublesome.

The night went on and after the ride, they invited me to stay at their place, I found they were living in dorms with 60 people from Vanuatu and in that village, there were 400 of them. I found that they lived in precarious conditions and got exploited by some kiwi landlord and contractor, same as me when I just arrived in NZ. They didn’t have internet or phones, but they were so happy.

Of course, they shared their food and drinks with me. The special drink from Vanuatu is called cava. It’s not alcoholic but they extract it from some kind of root, it makes them very relaxed and calm, like smoking week, they said its like drinking weed.

When I tasted it, it was just terrible, terrible taste, so I asked them why dont they put some sugar on it to make it taste drinkable, they said noooo and they laughed at me, but for me it was just the logical thing to do because that thing tasted so bad, like vodka. I don’t understand how people can drink vodka, tequila, sake, soju by itself, it’s just disgusting.

There are many many Pacific Islanders here in New Zealand, picking fruits and doing farm work, and I remember that before I went to Korea, I had had the chance of visiting many other countries, but after living in Korea for 9 months, I thought Korean people were the nicest people I had met. Then I moved to Taiwan and changed my mind, Taiwanese were by far the best.

Now, if I had to make a chart with the most hospitable people I’ve met it’d be something like this:

And still many people ask me if I miss Argentina or if I plan to go back there. I always say I don’t know, but what I actually want to say “probably no, or maybe just on holidays” but that’s a very cold answer, people don’t like cold answers even though they are honest. They want a warm, fake answer. A reassuring lie instead of an honest truth.

The thing is, that  I’ve been to just so many other amazing places, places where I felt welcomed. Places where I don’t need to live in fear of thieves, guns, and corrupted police. Places where not everyone’s out to get me. Places where I can go out at night without worrying about coming back alive. I can find a job and don’t need to constantly look over my shoulder to make sure no one is following me to kill me or mug me.

Tourists keep going on and on about how marvelous a place Argentina is, well, of course, it is if you go with foreign money that is worth like 5 times more there and you stay for just a few weeks or a few months, but if you have to live and work there, oh man!

And after I say I don’t know if I’ll ever go back there, they ask me “and what about your family?” The answer I usually give is that they are alright and we manage to keep in touch online, but what I actually  mean to say is that my family will have to understand that their son, nephew, grandson, etc, is happy somewhere else and that is not because of them, is because of me.

Traveling is not just something I do, is part of who I am.

Something I have to do for myself and has nothing to do with anyone else.

And me leaving argentina had nothing to do with them either, it was just something that needed to be done.

The reason I chose to live at the edge of the knife, to jump from the bridge to the cargo train instead of running behind it and hopping on the last wagon. Digging a hole in the ground to sleep and swimming to the other side instead of taking the ferry is that I actually enjoy the thrill of the fight. I enjoy the challenge. The hardships. It makes me feel alive and somehow happy. But hey that sounds just so dramatic, doesn’t it? Sorry about that, here’s a rainbow~ 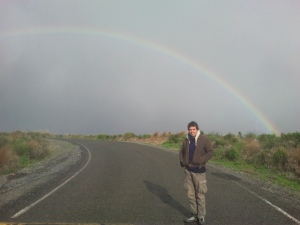 0 thoughts on “About Vanuatu and my life”