I have decided to talk a bit less politics and talk more about my daily life, feelings and thoughts. Of course, sometimes I feel down and a bit worthless like most people do, but then I think about it and realize I’m actually really lucky and most people reasonably envy my lifestyle.

It’s unique and strange, but quite interesting also, because I chose to live without using money, or using way less than everyone else, I’m usually in different countries or different cities within a country, try to live in the moment and learn something new every day.

I know what you’re thinking, living without money = freeloader, but actually is not like that, not at all! But more about that later.

Also, I meet many new people every day and learn from them as well

Yesterday it was Saturday, the 22nd, I was stuck without a place to sleep, as usual. Well not as usual, but it does happen a few times a week.

And as I cant pay money for accommodation for reason I will also explain later, my options are usually 4, Couchsurfing, knocking on the door, finding some other place (abandoned building, car, empty room) or sleeping in the bush

Yesterday I got stood up by my CS host after waiting for 5 hours int he cold, so gave up on that one, it was way too cold to sleep on the bush and I knew it would have been quite dangerous as it was literally as cold as it gets in New Zealand. very windy and dry air that making it hard to breathe.

So I found a burger king along the highway, got in and asked them what time do they close, hoping they would stay open all night, and I could have just stayed there and sleep during the day in some park.

They said they close at midnight, and I thought “oh man, I am fucked in the ass” as there was nothing else around, it was 8 pm, so I said well at least I still have 4 hours off the cold.

Sitting on a stool for 2 hours, thinking and dreaming. 3 other guys were sitting at a nearby table, looking at me.

I thought, hey, how nice would it if they invited me to stay at their place, but then I thought ufff, they actually don’t look so friendly and I would have to socialize, and then we would find all the things we don’t have in common. But hey, what the hell, is that or having no sleep. I knew I would have to walk all night long because its hard to knock on people doors after midnight, people are scared and with reason, and that’s providing I could even find their houses in the darkness.

Anyway, the 3 guys left and I switched to imagining a different random scenario.

I imagined there was a big group of about 50 people, mostly teenagers, and a few adults, like 5. I noticed that many of them were heavily over weighted, so I instantly thought they were Australians on a school trip, but hey at a random burger king on the highway, at 11.30 pm, no that’s not possible, its past their bed time.

Reality didn’t care about what I think, 6 of them sat on my table and the adult in charge of them stroke a conversation.

“Hey man, where are you from?” He asked.

“I’m from Argentina.” I quickly replied.

He seemed a bit confused that I was the only person there and had no food on my table, so he asked: “Are you waiting for your food?”

I said: “Well… not really, it’s a bit cold outside so I was just hanging around.” I found that many people laugh when I say a bit cold, because actually is terribly cold.

I was aware of the fact I have this homeless vibe around me, with the beard, greasy hair, tired eyes, wearing lots of clothes and a filthy sleeping bag next to me, so he asked: “Have you got nowhere to stay?”

This is my chance, I thought, and said: “Yeah, I’m just waiting for that to… to come along.” He said I could stay at his mate’s place, one of the guys who was ordering burguers there with them.

That’d be awesome. I thought, but decided to go a bit japanesy about it and politely refuse. I said: “No, don’t worry. I don’t want to cause any trouble.”

“There’s no trouble.” He said. “Come and stay with us.” So I said: ‘”Are you sure?” He said of course and we kept talking, He mentioned they were from a Christian church and on their way home from some inter-churches school event. When he said that I thought ‘oh man, religion? what am I getting myself into’.

Then he said: “I don’t believe in religions, but have you heard of Jesus Christ?” I said: “Yes.” While reminding myself choices were thin on the ground.

Soon after that I found myself in a van surrounded by 10 kids ages 10 to 16, screaming around about who score more goals on the game they had just played. While they were shouting, I started calculating the odds of what had just happened, and came up with a kind of drake equation for it, some of the variables included a number of sports events they participated yearly for the ones they had to leave their city for, the amount of children that played, the amount of nights I find myself sitting in a fast food restaurant in the middle of nowhere before they close, and some of the constants were the number of fast food restaurants along the highway, the number of tables on this one, the number of adults, etc, and then I lost count, but well there were like 15 tables, more than 100 seats there, and just a few adults, chances one of them sitting next to me was easily 100 to 1, and while calculating that, and some kids staring at me, I thought to myself ‘this night took an unexpected turn’.

Now is the morning after. I had a great night sleep in a warm bed with clean sheets, a nice breakfast, a hot shower, and it was the time to face what I was most afraid of since meeting them. They said they were going to church and would you like me to come along, so I politely explained to them I was not really into religion and felt a bit uncomfortable going to church. I thanked them for everything and said I would be on my way and may try to make it to Queenstownn before nightfall.

They said: “Oh its alright, you can stay another night if you want to, you dont need to come to church.”

I said cool and now is almost noon, I’m typing this while they are in church, used the first hour to clean the kitchen and to do all the dished of the dozen children who had breakfast before leaving, so now can sit on the computer without feeling guilty. 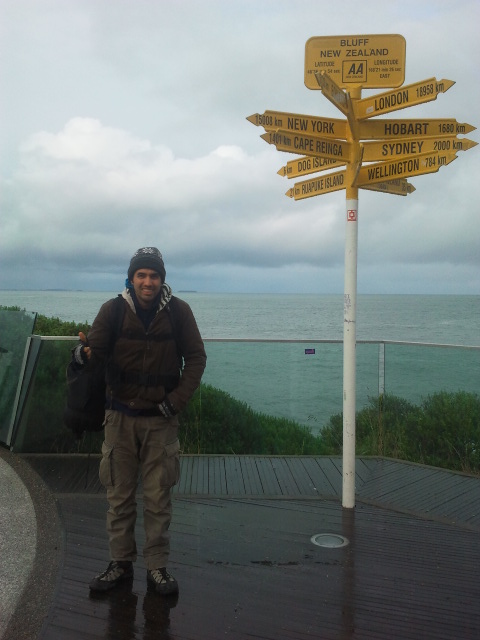