Friend: What do you want to do today?

Bruno: I want to move to Taiwan for good.

Bruno: No special reason, just a feeling, I know I should move there but I don’t know the reason.

Friend: So why don’t you move there, if you know that’s what you should be doing?

Bruno: well, you’ve never felt like you know that what you’re doing is not the right thing for you to do right now, but you dont have the guts to do what you know you should be doing instead?

Friend: Yes, all the time.

Bruno: Ok, so you know how I feel.

Friend: But I thought you were the master of going for your dreams.

Bruno: Wrong, I may be the master of telling other people to go for their dreams, which is different.

Friend: Still, you’re better at it than everyone else I know.

Bruno: You must know very few people then.

Friend: True, I should go out more.

Friend: You know what you have to do, there’s no way around it.

Friend: So just do it.

Bruno: I’m on it. Just Not yet, is not the right time yet.

Friend: So it’s in your plans already.

Friend: Because of the peer pressure and what you think they would think of  you if you didn’t do what you want to do, they will see you as a weak person, a person without the courage to do what he wants to do.

Friend: So that’s why you’re writing this here, so that’s it’s out there.

Bruno: Yes, you could say that.

Friend: And you’re proud of that.

Bruno: Well, it’s not like they have anything better to do.

Friend: Maybe they do.

Friend: So you think.

Bruno: Well I’m not forcing them to read, they read because they want to.

Friend: They could be out there enjoying life, playing with their dogs in the park, or spending time with their friends and families.

Bruno: Well at least I give them something to read.

Friend: So very considerate of you.

Bruno: What can I say? That’s what you get from a free blog without advertisement, from me to them, no catch, no small print, and tell you what, from now on I’ll start answering the readers questions as well, so if you have a question or you want me to talk about some subject in particular just drop me an email or just post it in the comments and it will be answered as a new post, how cool is that?

Friend: Not cool at all, I do have a question I’ve been wanting to ask you though.

Friend: How do you go about choosing which country you’re going to move to next? everyone else I know wouldn’t even dream of doing something like that. It’s pretty adventurous.

Bruno: As you said, you should start going out more, and about the country, first of all, it has to be a place I hadn’t been to before, and it would help if there was a prospect of some kind or something waiting for me there, like a job, a special person, or an opportunity of some nature, if there’s nothing of that, maybe I feel attracted by its language and feel the need of learning it, or I feel attracted by the culture and think I could learn something from it. Then, there’s the money issue… nah just kidding, money is not an issue anymore, I’m confident I could make a living anywhere.

Friend: And by a special person, you mean there has to be a girl you like there.

Bruno: That would be a very nice prospect, of course, unfortunately, most of the times that’s not the case.

Friend: Is there a special person waiting for you in Taiwan?

Bruno: I wish there was, because that would be just the extra push I need.

Friend: Why not trying www.taiwancupid.com? the number one dating site in Taiwan.

Bruno: Are you advertising some dating site now?

Bruno: Meh, I don’t want to meet a girl on a dating site, I’ll save that card for when I’m like 40 or like really desperate.

Friend: Actually you’re probably gonna be blind by the time you’re 40, why not just using it now?

Friend: Yeah, so you can find creepy people like yourself.

Bruno: Hey I’m not the one dressing up as a kigurumi, now that was creepy.

Friend: Again with that? I told you it’s over, I’m not into it anymore, terminado amigo.

Bruno: Whatever? Really??? Is that the best comeback you’ve got?

Bruno: Come on, I know you’ve got it in you. 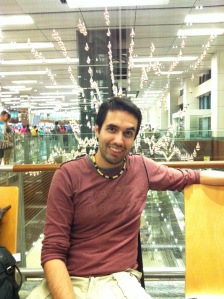