Let’s analyze this for 5 minutes.. if I steal your car, then you don’t have a car anymore, if I copy your car, then you still have your car and I have a car also. So how can copy something be made illegal?  It seems we have redefined the word stealing to fit the economic interests of the 1% up there. They used to burn books now they close websites.

If I remember right (that’s how much research I’m putting into this entry) there are something like 200 countries on this planet and 5% of them actually cares about copyright laws, USA, UK, Germany, Japan, Australia, and a handful more, the ones that are wealthy enough that they don’t need to worry about surviving anymore and can worry about making life difficult for those who are still surviving.

So the other 95% of countries on this planet, including the one I grew up in, the one I’m now, the ones I’ve spent most of my life at and the ones most of my friends are at right now, don’t really care about SOPA, or copyright laws because they have enough problems already struggling to pay for rent, food or just make ends meet.

Our rules used to be, don’t lie, don’t steal, don’t kill, and now we have thousands of laws that we can’t even keep track of.

And not even the lawyers can know all the laws because there are just too many, so you will always be breaking some of them without even noticing it. Especially when traveling, most countries have their own idiotic laws that you’ve probably never even heard of and you are breaking right now.

If I’m an artist, I make art because I like it and I want to share it with the world. I don’t do it to make money. I do it because I want to make other people happy, thus making myself happy.

I’m not saying all the musicians should play for free and the painters should paint for free, but these laws only protect the big record labels and Hollywood studios, which have billions already and don’t need to keep leeching from us.

So yeah, copyright whatever, the point I wanted to make in this post was this: shouldn’t we take care of the basic needs of our fellow humans instead of worrying about copyright laws?

Shouldn’t we make sure the basic needs of food, shelter, health, and education are covered for all the people on this planet before worrying about who’s copying some silly song or movie?

Of course, it’s terrible that our freedom gets raped by our governments once again. But we should set up some priorities.

I probably wouldn’t mind that they censor the ways of entertainment, communicating and expressing ourselves if they make sure everyone has food, water, health and happiness on this planet.

Ok, I lie, probably I would mind, just not as much as I do now. 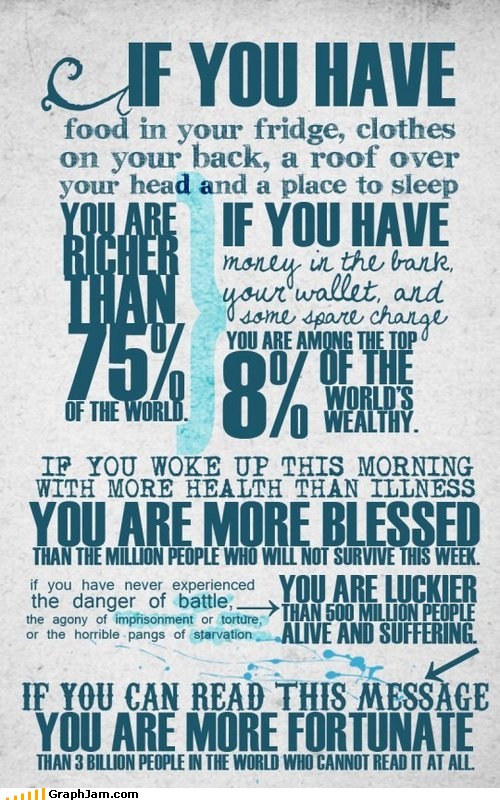