I met Jurgen back in 2007, and it inspired me a little bit. Of course, I’d met many people saying the same things before him, but he was the only one who lived like he wanted to and did what he wanted to when the rest of us didn’t dare to.
Before meeting him and traveling with him, I didn’t know living like that could be possible. He was completely free, kind of, well.. no, not really, not completely free, he just happened to had more freedom than everyone else around him.
I don’t mean financial freedom, or the “not having to work” kind of freedom, he had freedom of mind, he was able to control his thoughts better than the rest of us and tried to think only happy thoughts always and alter his reality to see the positive side in most things without feeling sad or depressed.
I know many will argue that there can’t be happiness without sadness and sadness gives meaning to happiness so we can experience happiness only if we had been sad before. It’s a valid argument of course, but I’m not gonna get into that now.
Jurgen never meant to teach me anything, but just by hanging out with him I learned that:
– It’s ok to not know everything.
– It’s ok to not have a plan.
– It’s ok to be late.
– I shouldn’t worry about anything.
– It’s ok not having a cell phone and not knowing what time/date is it.
– If I don’t do stuff, someone else will do them, maybe.
– If I don’t do something today it doesn’t mean I have to do it tomorrow, it can stay undone.
– It’s ok to just drop by for no reason.
– It’s ok not having a place to sleep tonight.
– It’s ok to just play games all day.
– It’s ok to live without money.
– It’s ok to wear the same clothes every day.
– It’s ok to smile to strangers.
– I should give my money and food to the homeless.
– It’s ok to be by myself.
– It’s ok to live in a small house with many people and sleep all next to each other on the living room’s floor.
– It doesn’t matter if I’m not good at anything.
– It’s ok not to shower.
– It’s ok to dance very badly.
– It’s ok to eat things I find on the street, it’s ok to take food from the dumpster and we don’t need to wash the fruits before eating them.
– It’s ok to leave and never come back.
– You can’t please everyone always.
– It’s ok to do whatever you want.
Also, he would always contradict me, so I get to challenge myself and open my mind.
If I say I don’t want to work, he would tell me about how fun work can be, and then start painting the walls or something.
If I say I don’t want to go out he would remind me of all the nice people that want to see me today.
If I don’t want to meet new people he would remind me that there are still many people out there that haven’t met me yet and are waiting for a chance to get to know me.
If I say I feel lonely he would tell me to deal with it by myself.
If I say I don’t want to get up, he would open the windows and play music so I get up.
If I ask him why is he learning German, he would say that is a nice language.
If I ask him why the cars don’t stop for us he would say it’s because I’m ugly and don’t smile to them.
If I ask him why did he stop walking he would say it’s time for a picnic.
If I tell him he looks ridiculous carrying that big backpack he would say he doesn’t care.
If I ask him how can he eat at Mc Donalds he would say it tastes good.
If I say I don’t know what to do with my life he would tell me I don’t need to do anything. 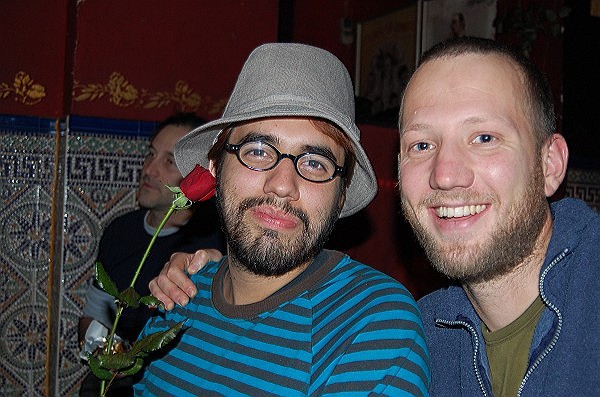